Bionano offers an end to end solution for analysis of structural variation. The workflow includes sample preparation, DNA imaging and genomic data analysis technologies combined into one streamlined workflow that enables you to identify structural variants and create de novo genome assemblies like never before. 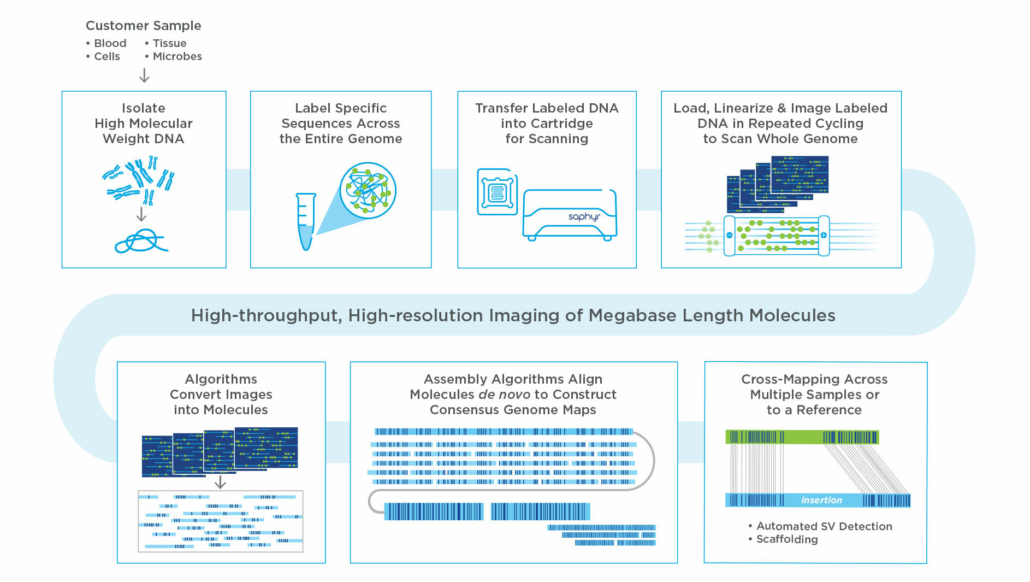 For ultra-high molecular weight DNA isolation from plant, animal and human tissues, detailed protocols  are provided to users. These protocols are based on the isolation of cells or nuclei in an agarose matrix, where DNA purification takes place while the molecules are stabilized in agarose. By the end of the purification process, the agarose is digested and molecules up to chromosome arm lengths in size are released.

The Bionano DNA labelling kit provides the reagents needed to label DNA at specific sequence motifs for imaging and identification. These labelling steps result in a uniquely identifiable sequence-specific pattern of labels to be used for de novo map assembly. 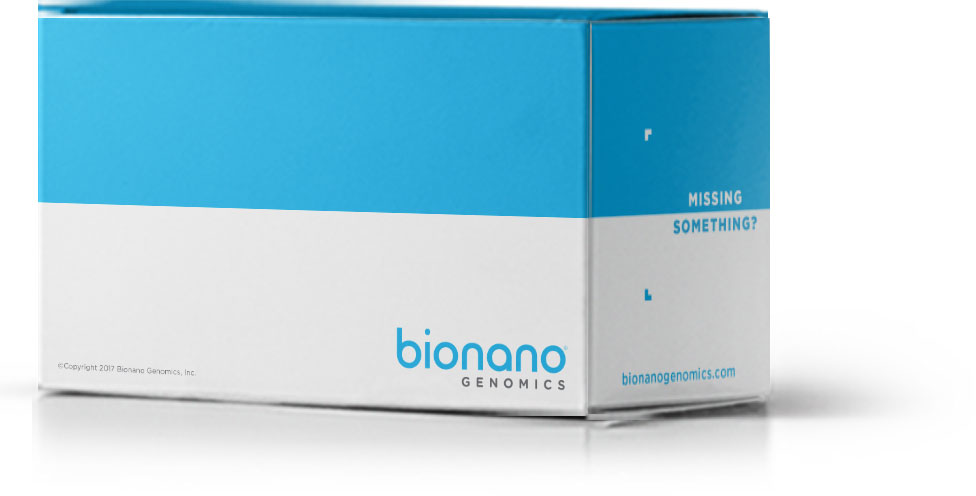 The primary chemistry, Direct Label and Stain (DLS), recognizes a 6 base pair sequence motif and transfers a fluorescent label directly to it in a single enzymatic step.

A labeled DNA sample is pipetted onto the Saphyr Chip™ in one of the flowcells. Saphyr electrophoretically controls the movement of DNA in the flowcell. A gradient of micro- and nano-structures, upstream of Saphyr Chip’s NanoChannels, gently unwinds and guides DNA into the NanoChannels.

Saphyr Chip’s NanoChannels allow only a single linearized DNA molecule to travel through while preventing the molecule from tangling or folding back on itself. The nanofluidic environment allows molecules to move swiftly through hundreds of thousands of parallel NanoChannels simultaneously, enabling high-throughput processing to build an accurate Bionano genome map.

Once raw image data of labeled long DNA molecules is captured by the Saphyr instrument, it is converted into digital representations of the motif-specific label pattern. Bionano Solve™ data analysis software then assembles the data de novo to recreate a whole genome map assembly.

This site uses cookies. By continuing to browse the site, you are agreeing to our use of cookies.

We may request cookies to be set on your device. We use cookies to let us know when you visit our websites, how you interact with us, to enrich your user experience, and to customize your relationship with our website.

Click on the different category headings to find out more. You can also change some of your preferences. Note that blocking some types of cookies may impact your experience on our websites and the services we are able to offer.

These cookies are strictly necessary to provide you with services available through our website and to use some of its features.

Because these cookies are strictly necessary to deliver the website, refuseing them will have impact how our site functions. You always can block or delete cookies by changing your browser settings and force blocking all cookies on this website. But this will always prompt you to accept/refuse cookies when revisiting our site.

We fully respect if you want to refuse cookies but to avoid asking you again and again kindly allow us to store a cookie for that. You are free to opt out any time or opt in for other cookies to get a better experience. If you refuse cookies we will remove all set cookies in our domain.

We provide you with a list of stored cookies on your computer in our domain so you can check what we stored. Due to security reasons we are not able to show or modify cookies from other domains. You can check these in your browser security settings.

These cookies collect information that is used either in aggregate form to help us understand how our website is being used or how effective our marketing campaigns are, or to help us customize our website and application for you in order to enhance your experience.

If you do not want that we track your visist to our site you can disable tracking in your browser here:

We also use different external services like Google Webfonts, Google Maps, and external Video providers. Since these providers may collect personal data like your IP address we allow you to block them here. Please be aware that this might heavily reduce the functionality and appearance of our site. Changes will take effect once you reload the page.